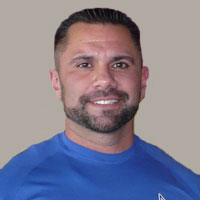 Robert Dunlevy is proud to be a West Virginia native.   His passion for fitness started at an early age and led him to pursue a Master’s Degree in Exercise Physiology.   Early on in his career, he became Director of an Outpatient Aquatic Therapy in Bridgeport WV.  His desire to improve lives led him to also start a Personal Training business specializing in Post Rehabilitation and Fitness.  From there, he spread his expertise into taking the lead as Head Exercise Physiologist at Waynesburg Hospital while maintaining his Personal Training business in Morgantown.  He also, served as adjunct professor for a short stent at Waynesburg College.  He was then recruited by Pro Performance Rx at inception as the Fitness Director.

This eventually led to taking over as General Manager of Pro Performance Rx.  He has brought his overall philosophy of fitness to expanding Pro Performance.   His philosophy is based on the reality that “Fitness is an Evolutionary Process for Everyone”.  From beginner to elite athlete, under Robert, Pro makes sure it offers something for EVERYONE. Three locations for One Price. He wants everyone to BE MORE!